In a tweet that reflects a common spin in the media, MSNBC anchor Andrea Mitchell yesterday dismissed the importance of the disclosure that former Vice President Joe Biden requested the “unmasking” of former national security advisor Michael Flynn. Mitchell called Biden’s action “routine” and the story “gaslighting.”  What is striking about this spin is that ignores the fact that Biden, only the day before, denied any involvement in the Flynn investigation or more than passing knowledge of its existence. It also adopts a misleading statistic on the occurrence of such unmasking requests. (I had to share this cartoon entitled “The Blessed Effects of Gas Lights” from London in 1813 on the perceived dangers of gaslighting. It appears the danger remains much the same in the 21st Century).

Mitchell was responded to a tweet from New York Times reporter and MSNBC contributor Charlie Savage that stated:

“Under US surveillance rules, unmasking an American’s identity in a report derived from foreign-intelligence surveillance is routine when necessary to understand (e.g., who was the Russian ambassador talking to?). The NSA did so 10,000 times last year, nearly 17,000 times in 2018.”

I have also pointed out that unmasking is routine among intelligence agencies but it is less routine for political figures like Joe Biden.  Among those asking for the unmasking were not just Biden but then-U.S. Ambassador to the United Nations Samantha Power and Obama’s then-chief of staff Denis McDonough.  The unmasking also occurred shortly before the opposing party was set to take over the White House.  Moreover, we now know that there was no credible evidence of Russian collusion supporting the investigation.

Mitchell, the chief foreign affairs correspondent for NBC News, however, criticized those who have raised such concerns, tweeting “10 thousand unmasking last year, 17 thousand in 2018. Necessary and routine. Can people please stop trying to gaslight us?” Mitchell pleaded.

Under US surveillance rules, unmasking an American’s identity in a report derived from foreign-intelligence surveillance is routine when necessary to understand (e.g., who was the Russian ambassador talking to?). The NSA did so 10,000 times last year, nearly 17,000 times in 2018. 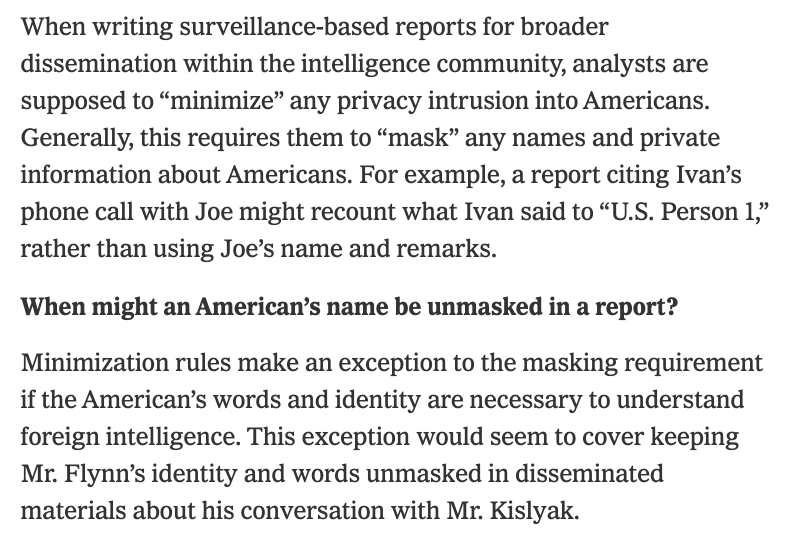 Once again, the news element of the story was enhanced by Biden’s earlier denial. Moreover, as I argue in a column this morning in the Hill, the new information adds to the concern over the use of national security systems by the Obama Administration to investigate the campaign and various officials with the opposing party. The media continues to dismiss such concerns despite recent evidence showing that a long list of Obama figures testified that they never saw any evidence of Russian collusion by the Trump campaign.  The Flynn investigation remains controversial for many Americans and Biden’s conflicting answers on his knowledge and involvement magnify the importance of this story. Some of us remain very concerned over the investigation by the Obama Administration based on flimsy and later rejected evidence, including a dossier paid for by the Clinton campaign and the Democratic National Committee.

There was nothing unlawful or even strange about Flynn speaking with Russian diplomats as the incoming National Security Adviser, particularly after the Obama Administration imposed sanctions just before the Trump Administration came into office. Once again the date is important. These unmasking requests occurred between November 8, 2016, and January 31, 2017 – literally as the Obama Administration was packing up to leave the White House.  It also occurred when the Flynn’s name was leaked to the media.  It would seem a matter of media interest if Democratic political appointees not only unmasked Flynn as they were leaving office but his identity was then leaked to the media from a classified document.

I believe that Savage’s data (and Mitchell’s use of such data) is legitimate to point out that unmasking is a routine practice. However, the more relevant data is the requests for such unmasking by individuals like Biden, Power, and McDonough.  I do not have that data, but I think that it would be useful before portraying any coverage or commentary as gaslighting.