The New York Times is under fire today for publishing the opinion of Sen. Tom Cotton (R, Ark.) on the use of troops to quell the unrest following the death of George Floyd.  Journalists and opinion writers have insisted that such views should not be even published because they disagree with it.  I have strongly opposed the suggested use of federal troops on both legal and non-legal grounds. It would be an unnecessary escalation of the tensions and curtail the exercise of important free speech activities.  However, this view is shared by many and the use of troops has occurred previously in our history.  The call for effective censorship of opposing views from journalists is a chilling example of how much ground has been lost in the protection of free speech values.

Just a few days ago, I discussed how members of Congress denounced the New York Times for running a factual headline that was viewed as too neutral.

Various Democratic members and leaders were livid.  Hawaii Sen. Brian Schatz objected “The New York Times headline writers are going to Both Sides the country to death.” There was a time when “going to both sides” was viewed as the very definition of journalism.

This controversy is far more concerning given the journalists and writers condemning the newspaper from sharing an opposing view on the use of federal troops.  It does not matter that this is a prominent issue being debated, it is the reported position of the President, and it is a piece written by one of the most influential members of Congress.  All of that would seem to make it important to the discussion, even if one disagrees with the position.

NYT reporters in a rare open revolt over the opinion side running Tom Cotton’s op-Ed calling to deploy the military to “restore order.” 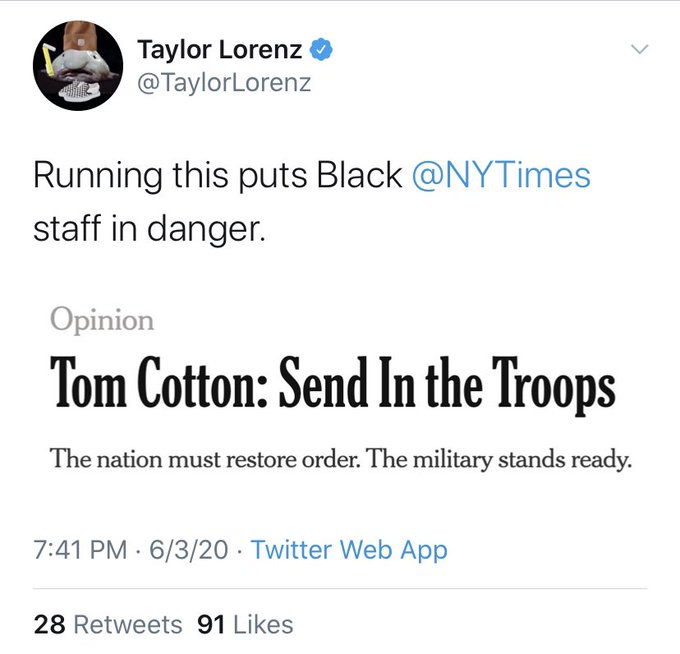 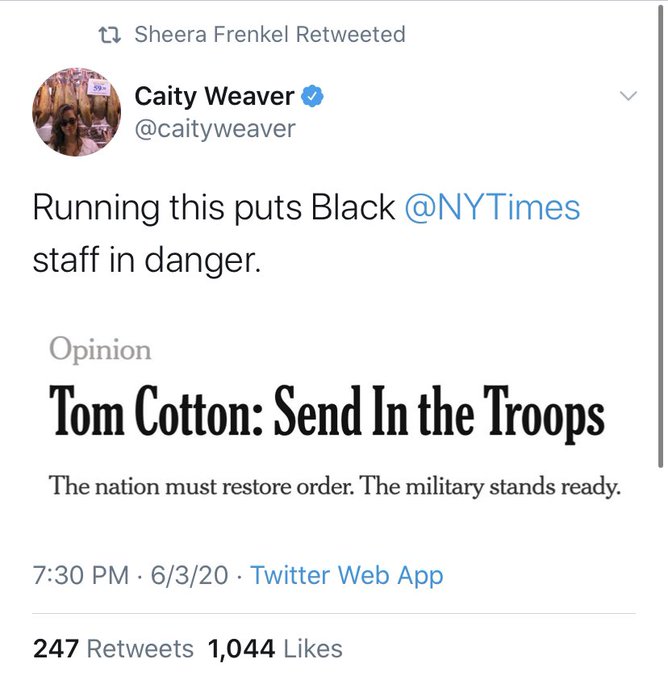 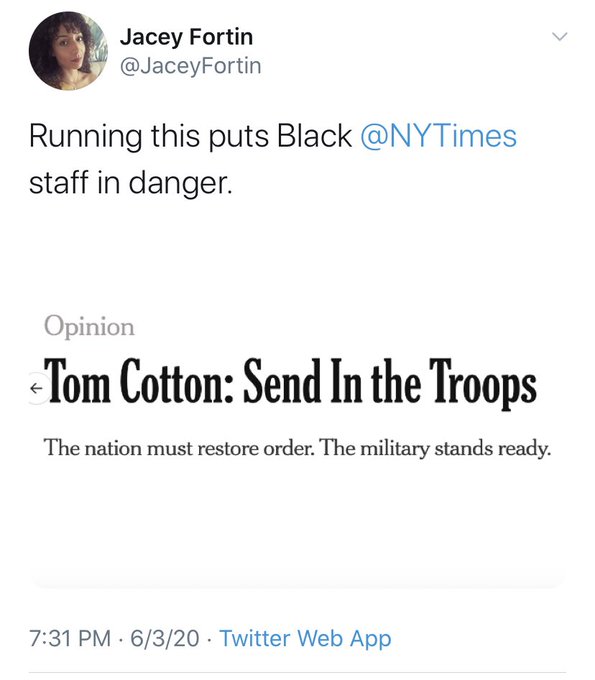 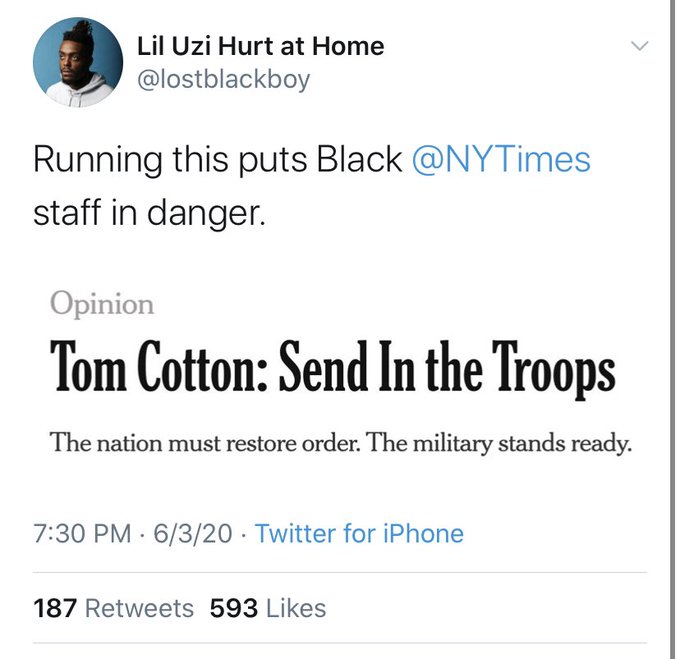 “As a NYT writer I absolutely stand in opposition to that Tom Cotton ‘editorial.’ “We are well served by robust and ideologically diverse public discourse that includes radical, liberal, and conservative voices. This is not that. His piece was inflammatory and endorsing military occupation as if the constitution doesn’t exist.”

First, Cotton would likely strongly disagree that he ever suggested military occupation in the use of troops, which has occurred previously.  Indeed, he wrote against that very point:

“This venerable law, nearly as old as our republic itself, doesn’t amount to ‘martial law’ or the end of democracy, as some excitable critics, ignorant of both the law and our history, have comically suggested. In fact, the federal government has a constitutional duty to the states to ‘protect each of them from domestic violence.’ Throughout our history, presidents have exercised this authority on dozens of occasions to protect law-abiding citizens from disorder.”

However, simply declaring an opposing view “inflammatory” is no license to censor or block the view from being heard.  An editorial page should be about debate and dialogue on such issues.  Even if they are inflammatory to some, our newspapers are a forum for dialogue not an echo chamber for approved messaging.

Running this puts black @nytimes writers, editors and other staff in danger.

I am dealing with two professional situations where I am being disrespected and taken advantage of and I could just scream. And if I push back I will be labeled as “difficult.” It’s a lot.

That distinction is clearly rejected by Sewell Chan, a former Times op-ed page editor, who tweeted “As a former @nytimes Op-Ed editor I am reluctant to weigh in on my alma mater. But the decision to publish @SenTomCotton calling for troop deployments to quell unrest falls short of sound journalistic practice.”

THREAD: As a former @nytimes Op-Ed editor I am reluctant to weigh in on my alma mater. But the decision to publish @SenTomCotton calling for troop deployments to quell unrest falls short of sound journalistic practice.

An editorial page is about opinions, often controversial, on contemporary issues.  This is one of the most discussed issues in Washington and is being raised by one of the most important members of Congress.  Yet, Chan is suggesting that the New York Times should only publish the opposing view. It is the very definition of echo journalism.  It also ignores that publishing such views often works to galvanize opposition and counterarguments.

I have no problem at all with Times opinion writer Charlie Warzel stating “[I] feel compelled to say that i disagree with every word in that Tom Cotton op-ed and it does not reflect my values.”  However, he then added that publishing that opposing view is “unacceptable and there should be resignations.”

The Times publishing Tom Cotton’s abhorrent op-ed is unacceptable, and there should be resignations.

Once again, I share the disagreement with the column. However, there is a growing orthodoxy in journalism that is now openly calling for the censorship of opposing views.  It is particularly problematic when opinion writers seek the removal of editors for allowing such opposing positions to be published.