We have followed as the administration and faculty at The Evergreen State College have undermined their institution through national controversies and a failure to defend academic values.  This would lead to a sharp drop in applications.  Under deterred by the costs to their institution, the faculty seems intent on confirming the worst stereotypes of their school. The latest is a resolution that the faculty has proposed to ban the word “covenant” from official documents. The faculty drafters insist that the term reflects “cultural genocide” and will ban its use despite most people who fail to see the common term in the same way.

The motion below states “[T]the word ‘covenant’ represents for many members of the Evergreen community the efforts at cultural genocide of Native Nations through the federal Indian boarding school system” and “needlessly using a word that institutionalizes the devastating colonization of Native Peoples.”  Instead the faculty wants to require the use of the term “community agreement.”

Putting aside the continuing harm done by the Evergreen faculty to their own school which has seen huge drops in admission and layoffs, the basis for the resolution works too hard to find a reason for outrage against this noun.  Covenant has conventional, religious, and legal uses as an agreement or contract based on an exchange of promises.  It can be used to signify a moral covenant with God or a covenant tied to property.  The word has been used at the college to reflect an agreement among students and the college for example. The school defines the term on its website:

“‘COVENANT’ (an agreement, a coming-together)  Covenants at Evergreen serve as learning agreements between faculty and students in lieu of conventional grading arrangements. Covenants spell out program policies and expectations for earning credit. Good faith compliance with this covenant is an academic requirement.”

The effort to assign this one meaning is contrived and artificial. The effort to ban the use of a noun like covenant reflects an increasingly common desire by some to control the speech and even words of others. 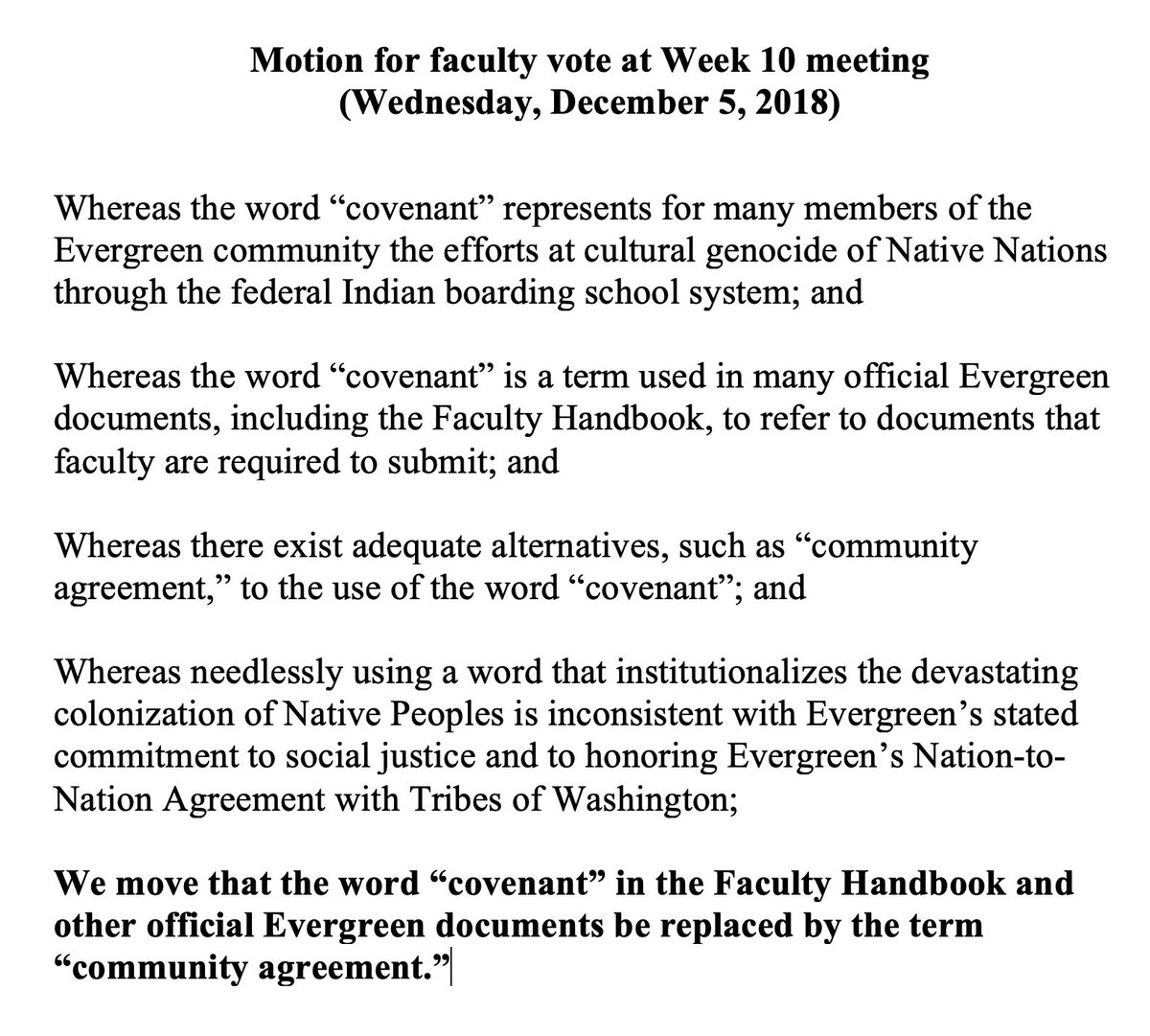 The @EvergreenStCol faculty, faced with plummeting enrollment and successive layoffs, have rallied their collective energies to… banish a word because it reminds someone, somewhere, of cultural genocide.

219 people are talking about this

And on his YouTube page Monday, Boyce dissected the resolution phrase by phrase, calling the proposed motion “virtue signaling” and pointing out the term that faculty should be referencing regarding historic Native American alliances is actually “Covenant Chain.”