A police station in Minneapolis was torched last night as looting and rioting continued in that city. The escalating violence and looting has magnified controversies over how networks are describing the scenes.  Earlier, Craig Melvin, an MSNBC host and co-anchor of “Today,” shed some light as to how his network is framing its reporting. Melvin tweeted a “guide” that the images “on the ground” are not to be described as rioting but rather “protests.”  That framing has been used on other networks, including some segments where the reporting seems bizarrely out of sync with the scenes in the background. Update: CNN appears to be drawing a distinction in an even more curious way.

On Thursday morning, Melvin tweeted “This will guide our reporting in MN. ‘While the situation on the ground in Minneapolis is fluid, and there has been violence, it is most accurate at this time to describe what is happening there as ‘protests’ — not riots.'” It is not clear where that “guide” originated but Melvin is quoted for a source.

Most television journalists from NBC to CBS to ABC to BBC to Fox have done excellent jobs in stressing the understandable outrage over the death of George Floyd, which is currently under investigation not just by local prosecutors but the Justice Department. Indeed, many of these reporters have shown considerable bravery in going into very volatile and violent scenes to report on the protests.

However, the looting and destruction is also a major part of the story as is the storming of a police station and burning it.  The effort to avoid referring to the rioting raises questions about the editorialization or shaping of the news.  There are not a lot of ways to refer the looting and burning of businesses like the Target.

In the meantime, MSNBC journalist Ali Velshi stood in front of burning buildings but reported “For most of the day, today, it looked a lot calmer than yesterday looked,. And that’s what happened yesterday. It picked up later in the evening. The crowds gathered here and the standoff with the police looked very different last night.”  He added:

“I want to be clear on how I characterize this. This is mostly a protest. It is not, generally speaking, unruly but fires have been started and this crowd is relishing that. There is a deep sense of grievance and complaint here, and that is the thing. That when you discount people who are doing things to public property that they shouldn’t be doing, it does have to be understood that this city has got, for the last several years, an issue with police, and it’s got a real sense of the deep sense of grievance of inequality.”

The concern over semantics in a story involving obvious rioting, looting, and arson undermines the reporting overall. There are frankly only a few words to describe rioting.  It reminds me of my litigation representing members of Congress seeking to stop the undeclared war in Libya during the Obama Administration. The Administration argued in court that attacking the capitol and military force in Libya was not a “war” but a “kinetic action.”

It would be hard to come up with similar alternatives for these scenes.  For example, “arson” could be called “combustive demonstrations” but it does not really convey the scene. Likewise, “looting” could be referred to as “unpurchased advocating” but it does not capture the scene of men breaking open cash registers with hammers or pictures of stores being picked clean of everything from big screen televisions to garden tools.

What is bizarre is that there is no need to try to sanitize or shape the story. There is a legitimate outrage over this death.  There are many peaceful protests and most protesters are not looters or arsonists.  However, there was obviously a riot unfolding and the media should be focused on reporting on scene rather than shaping it in a more positive light. Viewers can understand that there will always be an element within protests that will turn to violent or criminal means.

The men with the hammers stealing cash are not protesters. They are looters.  The people storming and torching a police station are not protesters. They are rioters.  That seems a lot easier than tweeting out speech guidelines.  It does not take away from the terrible underlying story of Floyd’s death or the need for action on that case. It does not belittle the reason for the peaceful protests or the anger of many in the city. It is just fair reporting on what is occurring at these scenes.

Update:  CNN this morning seemed to make the same distinction in dealing with President Trump’s latest controversial tweet.  The anchors condemned Trump for “calling protesters ‘thugs.'” While many criticized the tweet (as I did), Trump was referring to people looting and rioting, not protesters. Notably, CNN distinguished between protesters and looters on the portion of the tweet dealing with shootings.  Thus, it suggested that a single short tweet was calling all protesters “thugs” but then switched into only calling for the shooting of looters.  The tweet however clearly refers to the looting and rioting:

“These THUGS are dishonoring the memory of George Floyd, and I won’t let that happen. Just spoke to Governor Tim Walz and told him that the Military is with him all the way. Any difficulty and we will assume control but, when the looting starts, the shooting starts. Thank you”

The “dishonoring” obviously refers to the violence.  Yet CNN parsed the tweet to make the first sentence refer to all protesters and then acknowledged that the shooting line that followed refers to looters. How did the subject change mid tweet? 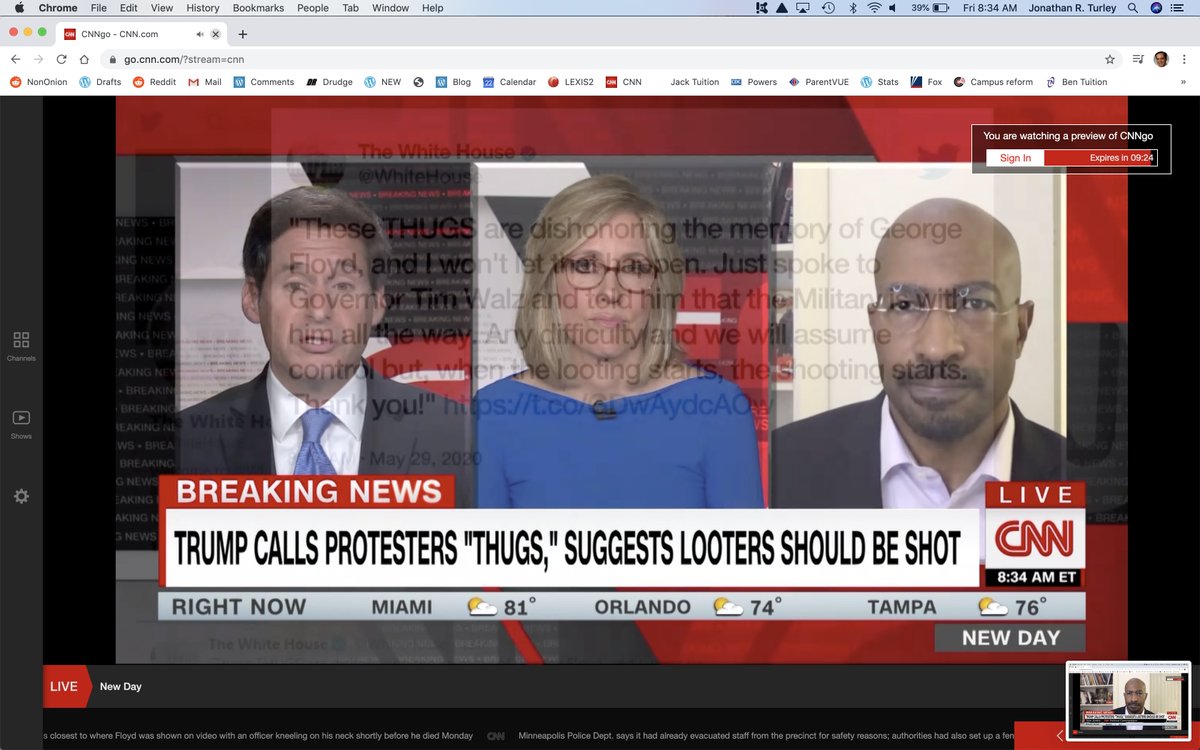 Of course, on Saturday, CNN offered another option. Call them looters but call the act of looting a form of political expression.

On Saturday morning, NBC continued the distinction and repeatedly the clearly false statement that Trump called protesters “thugs.”  What is striking about this continued framing is that yesterday Trump stressed that he believed that protesters were good people who were legitimately angry over this tragedy.  He supported their right to protest while denouncing rioters.  Nevertheless, NBC is still insisting that his references to looters and rioters was a reference to all protesters.