I previously wrote a column about the rising calls by Democratic leaders and activists for different forms of public and private censorship. Indeed, the recent extreme demands and controversy at the New York Times shows how speech controls have been a virtual article of faith for many.  Twitter’s actions against Trump tweets are another example of the inconsistent use of such controls.  Now GoFundMe has taken it upon itself to censor causes that it views as offensive in closing down a fundraiser by conservative political commentator Candace Owens in support of an Alabama cafe whose co-owner criticized the George Floyd protests.  The question again is not whether we agree with such sentiments but the free speech implications of these forms of private censorship.  Rather than respond to such controversial statements, critics today focus on silencing the speakers or barring their views or causes to be heard by others.  What is interesting is that, by abandoning neutrality, GoFundMe is now affirming that it does regulate content and will face demands for more such action. That could undermine the position of these companies against the loss of immunity under Section 230 of the Communications Decency Act.

Birmingham’s Parkside Cafe, whose co-owner Michael Dykes said Floyd was a “thug” and protesters were “idiots” in a text message to a co-worker that was posted online.  The comments in my view were offensive and inflammatory but they are not my views.  Dykes was expressing his personal view and the result is that he was given death threats and the cafe boycotted.

Owens, who is African American, shared the views of Dykes. She has also been criticized for statement like this one:

“The fact that he has been held up as a martyr sickens me. George Floyd was not a good person, I don’t care who wants to spin that. I don’t care how CNN wants to make you think he changed his life around, He was just after his sixth or fifth stint in prison.”

On Sunday, Owens disclosed that her campaign to support Dykes’ cafe was suspended by GoFundMe after the company found her fundraiser “to be in support of hate, violence, harassment, bullying, discrimination, terrorism, or intolerance of any kind.”

After raising $205,000 in a few hours @gofundme decided to halt my campaign for the Parkside Cafe in Alabama. At their discretion, they deemed that funds raised for a conservative business constitutes “intolerance”
They WILL however give the funds raised thus far to the cafe… 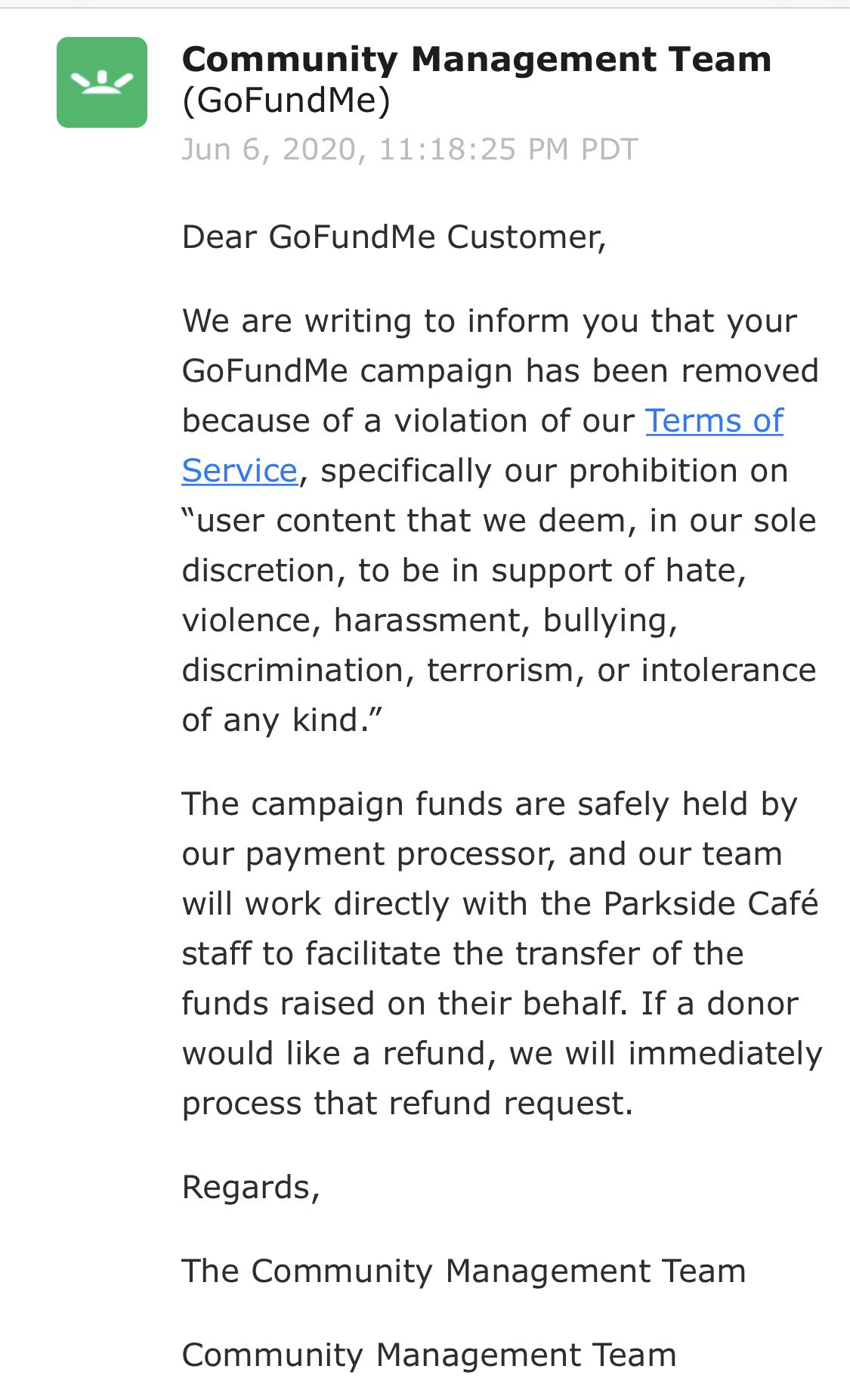 “Guess my message to little kids would be for them not to idolize men that: Get high on fentanyl, get high on meth, use counterfeit bills, shove guns into the stomaches of pregnant women while robbing them, go to prison 5 times. What a truly horrible message I carry.”

Guess my message to little kids would be for them not to idolize men that:

Fuck 2016 what are you teaching little kids who have to listen to you bring up a dead man’s past. Are you teaching them to not care about people who have less them they do? Fuck 2016 fix your slip its showing. You should flip flop again because you look really bad.

Again, my interest is not in the content of these comments but the role of previously neutral forums to engage in content based private censorship.  Both the owner and Owens were expressing their views of Floyd.  Many other have expressed equally controversial opinions about police officers, Trump, and others.  Will they all be now banned from raising charitable donations?

The immunity under Section 230 of the Communications Decency Act is based on the theory that these sites are not responsible for content. Courts have interpreted the provision to give sweeping immunity for companies like Twitter and Facebook because they simply supply a forum for others to express themselves. These sites are now actively engaged in forms of private censorship.

As many on this blog will attest, I take a simple approach to free speech.  The solution to any bad speech is good speech, not silencing of those with whom you disagree. I would take the same position with shutting down voices on the left as with the right.  GoFundMe is a forum for people to express themselves through fundraising.  It, like Twitter, is an important place for people to engage in free speech and association.  I do not see why that mission is not enough.  GoFundMe does not have to endorse such causes to allow people to gather at its site.  Now however there will be additional claims made by those who want to silence people with opposing views. GoFundMe has invited such demands by engaging in content-based regulation.