Police are looking for the latest idiot to ignore zoo signs and barriers (and common sense) to get a videotape of himself spanking a hippopotamus at  the Los Angeles Zoo.  The crime is trespassing but the costs can be fair higher for the animals and the intruders.  Hopefully, the police will find and charge this individual.

As we saw with animals like Harambe, careless or reckless human conduct can lead to the shooting of these animals to protect people who find themselves inside cages or trapped with animals.  Since hippos kill more people than any animal in Africa, a fall by this individual could have well led to the shooting of both hippos to save him from his own thoughtless prank.

It is bad enough to have such animals confined in zoos, but people cannot resist using them for childish or sadistic acts like the common practice in China of throwing rocks and trash at animals.  These people also make it more difficult for the public to see such animals.  It was relatively easy to overcome this barrier because zoos try to allow people to get as close as possible to observe these magnificent animals.  Virtually everyone respects the zoos and the animals enough to comply the signs and instructions, but less than one percent of the population will try a stunt like this.  Indeed, California previously dealt with drunken men who taunted a tiger with lethal consequences. The zoo was later sued over the height of the protective wall.

The video shows a man jumping a protective railing to creep up on two hippos, Rosie and Mara. He then smacks Rosie on the rear and runs away while holding his arms up in a gesture of victory. 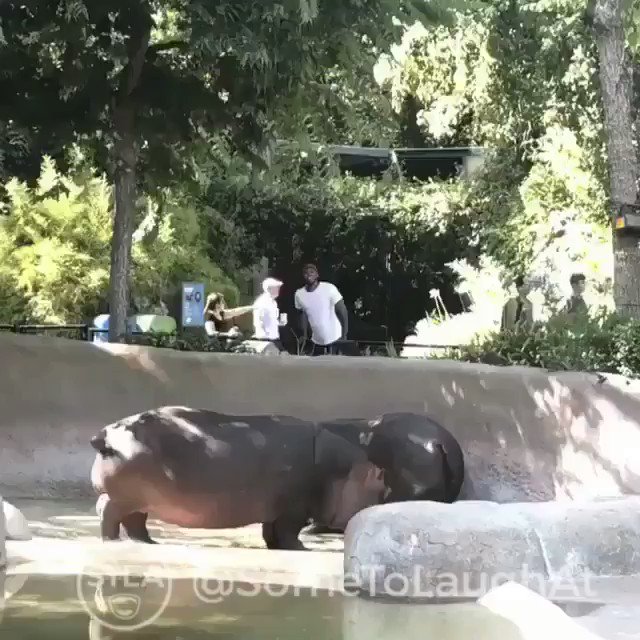 Could you ever be this bold to slap a #hippo butt? #STLA#whodidthat #ikyfl #couldyou #daredevil #zoomchallenge

That would seem to cover this case rather nicely and, while it is only a misdemeanor, it is worth the police time and effort to deter future idiots who might want a trophy video in the future.

What do you think the appropriate penalty should be if this man is found?