Teen Vogue columnist Emily Lindin is under fire this week after writing how she is “not at all concerned about innocent men losing their jobs” over false allegations of sexual assault or harassment.  Lindin dismissed the dangers of false claims as low in joining other feminist writers in arguing that women must be believed in such cases. Indeed, Lindin wrote that even raising false claims could be a sign of hostility to women. I wrote recently how this standard was not used during the Clinton presidency where leading feminists not only supported Bill Clinton but continue to flock to events featuring the alleged  sexual harasser and assaulter.

Lindin insisted that “false allegations VERY rarely happen, so even bringing it up borders on a derailment tactic. It’s a microscopic risk in comparison to the issue at hand (worldwide, systemic oppression of half the population).”

In her best Madame Thérèse Defarge imitation, Lindin declared “The benefit of all of us getting to finally tell the truth + the impact on victims FAR outweigh the loss of any one man’s reputation.  If some innocent men’s reputations have to take a hit in the process of undoing the patriarchy, that is a price I am absolutely willing to pay.”

Of course, she will not have to pay that price because she is a woman and therefore always to be believed under her approach.  Nevertheless, she goes on to justify the disinterest in the innocence of men by focusing on how women have been historically abused: “How many of our reputations have suffered unfairly? How many of our lives have ALREADY BEEN destroyed because of physical violence against us? Why was that acceptable, but now one man’s (potentially) unfair loss of a career opportunity is not?” Thus, because women have been abused, Lindin insisted they are entitled to abuse a certain percentage of men. 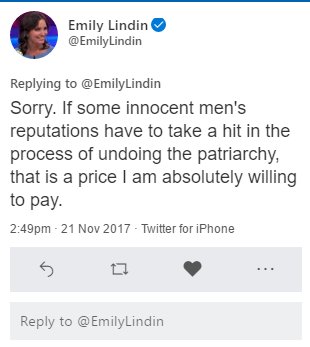 While the actual rate of false claims is subject to great debate, feminist writers often cite the figure of a three percent false reporting rate to justify rule changes (particularly on college campuses) that reduce due process protections for the accused.  The source for the figure is rarely cited but may be a study published in 2010 in a symposium on violence against women.  That study however found a rate of between 2% and 10%. However, this report focused on reported criminal sexual assaults and rapes.  There is a vast difference in the type of cases involving sexual harassment and criminal assault.  The step of reporting a crime to police is a significant one, including the added risk of being charged with filing a false police report.  Allegations of sexual harassment or civil assault are generally protected at workplaces or schools.  I expect that the rate of false claims is still quite low and there continues to be a serious problem in encouraging women to come forward when subjected to this type of abuse.  However, the basis for the statistic cited by Lindin is unclear.

Of course, even if the three percent figure is accurate, it does not justify the dismissive approach of people like Lindin toward due process and innocence.  The touchstone of a nation committed to the rule of law is that we do not change our approach based on general presumptions of guilt of any class of suspects.  More importantly, respecting due process does not mean a lack of commitment to enforcement. This the same canard that led the Obama Administration to force schools to strip their students of due process rights in sexual harassment cases.  It is also the same argument used by many people to sent terrorism suspects to military tribunals rather than our federal courts.  We have a system of criminal and civil adjudication that can deter such conduct and crimes without tossing aside our core values.

Conversely, I have also been critical of those who say that when public figures like Roy Moore or Bill Clinton deny sexual assaults, we should accept those denials pending unlikely criminal or civil cases.  For public figures, we have to make a judgment about the credibility of allegations. I found the allegations against both Clinton and Moore credible and have noted that people continue to adopt equally questionable bias in who (and when) they choose to believe victims in such cases.

Lindin, who writes on feminist topics like “slut shaming'”, sexist dress codes, and other how to send nude photos of oneself, responded to the criticism by taking her social media postings private.   Like many columnists who write solely from one perspective and topic, Lindin sees most everything in gender terms.  Thus, in listing how not to “slut shame,” she notes “I wasn’t allowed to dance by myself in the middle of a dance floor. And it was only because I was a girl.” Well, boys likely feel the same pressure not to dance alone in the middle of a dance floor. Indeed, in my experience, girls feel more comfortable dancing with other girls than boys do with other boys.  However, this type of low-grade analysis is pushed by Conde Nast to capture an insulated audience for writers like Lindin.  Her pieces have titles like “Why You Should Stop ‘Playing Hard to Get’ and Start Masturbating” (discussing her own experiences at aged 10).  In some columns, she makes rather surprising representations like her insistence that  growing up she heard the term “slut” used to her “as often as I heard my own name.”

In the meantime, Teen Vogue’s parent company, Conde Nast, simply did not respond to journalists who asked for a response (It is not clear if Conde Nast still considers itself part of a journalistic enterprise and, if it does, how it squares with refusing to answer questions from the media.